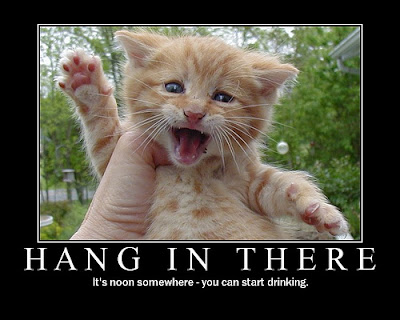 Fuck off as in I screw off all day today...smoke some of nature's medicinal, do a little shopping, walking around ye old mall looking at all the neat ass shit I can't afford but would love to buy....except I gave the ball n' chain all my credit cards so he could hide them from my shopaholic ass.

Yesterday was a real rough day around our house. A tiny, homeless, very young kitten was found under my car..he was dying. He was barely breathing and wouldn't move when touched or picked up. With all the feral females around, his mother probably moves her brood all over the fucking place and either forgot him or he was sick and she abandoned him...in any case it was emotional as hell for me to end his small, short little life.Even writing this friggin paragraph has made me fucking weepy. I spent most of the afternoon and the entire evening under the influence of two very strong VO's and soda with a side of vicodin...which means I slept the whole day and evening until around 11pm.

I will now probably be up most of the night, screwing around with my fantasy basketball and football teams. I am doing pretty well in both sports, with two of my three teams in 2nd place. For a female who plays against all males, that ain't bad folks. The dudes spout bullshit and bravado on the message boards daily so when I beat their sorry asses at the end of the week, I really give them a big fat ration of shit...yeah, I know...big surprise there.

As some of you know, I am a Blues lover and specifically Joe Bonamassa. Here is a live recent show from Cambridge, MA. The song: Slow Train.

I hope you all have a great weekend, love the ones your with and avoid beating the hell out of any rightwing nutter that is stupid enough to gloat over tuesday's election results. Personally, I am heading back to San Diego to spend time with my yuppie sista from hell...she has lots of useless shit to give me as she cleaned out the garage... and I never turn down useless but expensive shit...I might be a friggin 'librul' but I ain't stupid...sis buys only the best...she can afford it.
This Bitchfest by Unknown at Friday, November 05, 2010