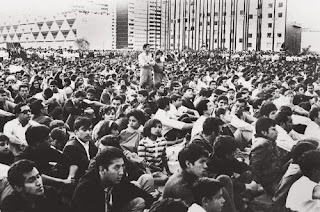 America, specifically the Federal Government and our CIA, have blood on their hands. They aided and abetted the brutal murder of untold numbers of Mexican citizens in what has become known as The Tlatelolco Massacre. Thank you to Peter, an anonymous commenter here, for reminding me of this day in Mexico's history. It is Mexico's Tiananmen Square.
The link above goes to the George Washington University's archives on this incident. Thanks to FOIA requests we can piece together what role our government played in this massacre of innocent students, children and adults by the Mexican government on October 2, 1968.
The exact number of dead will probably never be known because Mexico refuses to confirm how many died and were injured, although the government has admitted that the horrendous murders were committed without provocation by the protesters that held a rally that day.
The Mexican government has consistently refused to release key records of this incident of mass murder in their history. Former mexican President Luis Echeverría Alvarez, interior secretary at the time of Tlatelolco, was charged with genocide, but the charges were dropped...even though he is believed to be the mastermind of the military attack on thousands of unarmed peaceful citizens.
May he rot in hell for all eternity for what he did. Bastardo.
An excellent first person account can be read here. That is the link Peter left in my comments below. The picture at the top of the post is from that article. The picture below is a monument to honor the fallen from that day in Mexico City.
Our government is responsible for the deaths and injury to hundreds if not thousands of Mexican citizens on that day, as we sent killing tools to the Mexican government ahead of their hosting of the 1968 Olympics which began ten days later.

From the intro to the GWU archives on this incident, which were released on the 30th anniversary of the massacre:

To commemorate this thirtieth anniversary, the National Security Archive has assembled a collection of some of our most interesting and richly-detailed documents about Tlatelolco, many recently released in response to the Archive's Freedom of Information Act requests, all obtained from the secret archives of the CIA, FBI, Defense Department, the embassy in Mexico City and the White House. The records provide a vivid glimpse inside U.S. perceptions of Mexico at the time, and discuss in frank terms many of the most sensitive aspects of the Tlatelolco massacre which continue to be debated today: the political goals of the protesting students, the extent of Communist influence, Diaz Ordaz's response, and the role of the Mexican military in helping to crush the demonstrations.

But while the declassified U.S. documents reveal new details about Tlatelolco, perhaps most important is the challenge their release poses to Mexico today. Thirty years after the massacre, the Mexican government continues to deny its people basic facts about what happened -- refusing to open Army and police records to public scrutiny on the grounds of "national security," denying Congress the right to hear testimony by agents of the state who were present at Tlatelolco. The valiant investigative efforts by reporters, scholars, historians, and an official congressional committee have helped clarify the events of 1968 enormously. But Mexico's secret archives are also critical for a full understanding of Tlatelolco -- and until they are opened, doubts about the truth of the Tlatelolco massacre will linger on. 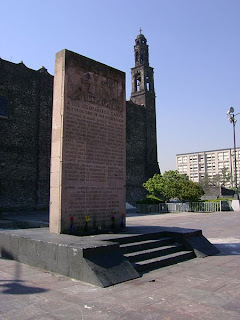 Will all the truth ever come out? Somehow,I doubt it...but a thank you to all the hard work done by Kate Doyle to get the truth released to the world. Oh, and thank you again Peter for reminding me.

This Bitchfest by Unknown at Thursday, October 02, 2008