The bat guano is hitting the fan:cease fire breaks down in Gaza 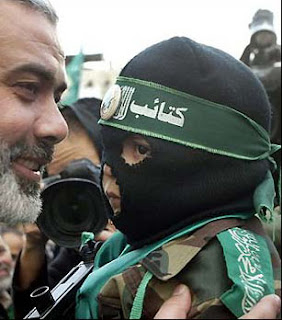 Hamas has fired rockets into southern Israel, sending 18 Israeli's to the hospital. From IHT:

Hamas officials said the attack was revenge for the deaths over the past 11 days of 11 militants and the recent increased Israeli closure of Gaza crossings. They said that while they wanted to continue the five-month-old truce with Israel, it seemed to them that Israel did not and if that was the case, Israel would pay the consequences.

Israeli officials, who say they have been keeping the crossings into Gaza shut in retaliation for the rockets, thereby greatly decreasing the supply of supplies and fuel, said it was Hamas that was breaking the truce. Senior Israeli officials met in Tel Aviv on Friday and vowed not to back down from any provocation.

Israel retaliates by keeping food and fuel needed to provide electricity from entering Palestine. It is going to get worse before it gets better. It's a nasty friggin triangle. Again, from IHT:

There are several factors at work beyond the tit-for-tat of the past week and a half. Hamas, which took over Gaza in June 2007 by kicking out its Fatah rivals, is feeling under unusual pressure because hundreds of its men have been arrested by the Fatah-dominated Palestinian Authority in the West Bank in recent weeks.

The arrests have been part of increased Israeli-Palestinian cooperation in which American-trained Palestinian troops are moving into West Bank cities, leading to some pullback by Israeli troops.

A second factor is that Egyptian efforts to broker a reconciliation between Hamas and Fatah have foundered, with Hamas alleging that Fatah had not made good on a mutual prisoner release.

Finally, under American and Israeli pressure, Egypt has started to destroy or shut tunnels into southern Gaza that have been a key source of supplies and fuel — and weapons — that have offset the Israeli closures.

It is all so fucked up over there...no one is right and everyone is wrong. Another generation being raised to hate...fucking lovely.
This Bitchfest by Unknown at Friday, November 14, 2008