Bill Ayers speaks on the Presidential Election and history. 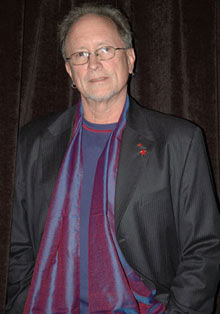 Yes my friends..that Bill Ayers. I do not demonize him, I salute him. I will stand up and applaud him and what he tried to accomplish when the Vietnam War was raging.

I will never consider him a terrorist...he is my freedom fighter, just as Cubans against Castro's government are considered such.

In These Times is giving Mr. Ayers a soapbox, which I truly appreciate..and here are his words, some of which I will reprint here:

What a Long, Strange Trip It’s Been
Looking back on a surreal campaign season
By Bill Ayers

Whew! What was all that mess? I’m still in a daze, sorting it all out, decompressing.

For the past few years, I have gone about my business, hanging out with my kids and, now, my grandchildren, taking care of our elders (they moved in as the kids moved out), going to work, teaching and writing. And every day, I participate in the never-ending effort to build a powerful and irresistible movement for peace and social justice.

In years past, I would now and then—often unpredictably—appear in the newspapers or on TV, sometimes with a reference to Fugitive Days, my 2001 memoir of the exhilarating and difficult years of resistance against the American war in Vietnam. It was a time when the world was in flames, revolution was in the air, and the serial assassinations of black leaders disrupted our utopian dreams.

These media episodes of fleeting notoriety always led to some extravagant and fantastic assertions about what I did, what I might have said and what I probably believe now.

It was always a bit surreal. Then came this political season.

During the primary, the blogosphere was full of chatter about my relationship with President-elect Barack Obama. We had served together on the board of the Woods Foundation and knew one another as neighbors in Chicago’s Hyde Park. In 1996, at a coffee gathering that my wife, Bernardine Dohrn, and I held for him, I made a donation to his campaign for the Illinois State Senate.

Obama’s political rivals and enemies thought they saw an opportunity to deepen a dishonest perception that he is somehow un-American, alien, linked to radical ideas, a closet terrorist who sympathizes with extremism—and they pounced.

Sen. Hillary Clinton’s (D-N.Y.) campaign provided the script, which included guilt by association, demonization of people Obama knew (or might have known), creepy questions about his background and dark hints about hidden secrets yet to be uncovered.

On March 13, Sen. John McCain (R-Ariz.), apparently in an attempt to reassure the “base,” sat down for an interview with Sean Hannity of Fox News. McCain was not yet aware of the narrative Hannity had been spinning for months, and so Hannity filled him in: Ayers is an unrepentant “terrorist,” he explained, “On 9/11, of all days, he had an article where he bragged about bombing our Pentagon, bombing the Capitol and bombing New York City police headquarters. … He said, ‘I regret not doing more.’ “

On the campaign trail, McCain immediately got on message. I became a prop, a cartoon character created to be pummeled.

When Alaska Gov. Sarah Palin got hold of it, the attack went viral. At a now-famous Oct. 4 rally, she said Obama was “pallin’ around with terrorists.” (I pictured us sharing a milkshake with two straws.)

My voicemail filled up with hate messages. They were mostly from men, all venting and sweating and breathing heavily. A few threats: “Watch out!” and “You deserve to be shot.” And some e-mails, like this one I got from satan@hell.com: “I’m coming to get you and when I do, I’ll water-board you.”

The police lieutenant who came to copy down those threats deadpanned that he hoped the guy who was going to shoot me got there before the guy who was going to water-board me, since it would be most foul to be tortured and then shot. (We have been pals ever since he was first assigned to investigate threats made against me in 1987, after I was hired as an assistant professor at the University of Illinois at Chicago.)

The good news was that every time McCain or Palin mentioned my name, they lost a point or two in the polls. The cartoon invented to hurt Obama was now poking holes in the rapidly sinking McCain-Palin ship.

There is much more to his article and his thoughts...I suggest you check it out m'dear reader..its worth your time in my humble yet vocal pov. ;)

Tags: Bill Ayers, In These Times, Bill Ayers speaks
This Bitchfest by Unknown at Friday, November 07, 2008