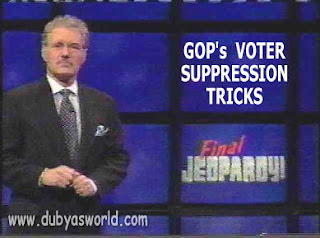 She's an idiot or she thinks her constituents are. Secretary of State Karen Handel, a Republican, has claimed federal law ties her hands, preventing her from extending early voting hours.

It's only because of Georgia's well documented racist, discriminatory past that they are specifically mentioned in the 1965 Voter Rights Act. Section Five to be exact.

But for Handel to state the law ties her hands is complete and total bullshit. The DOJ has acted expeditiously in the past to problems Georgia has had at election time. As TPM notes:

While the DOJ can take up to 60 days to review any change that is submitted, it has the power to grant expedited review in emergency situations -- and Georgia's situation would certainly seem to qualify, Gerry Hebert, a former acting head of DOJ's voting-rights section, told TPMmuckraker.

"Georgia has asked and been granted expedited review by the DOJ in the past, so to say because of the voting act, we can't do this -- that's not really accurate," Hebert said. "The DOJ has done this in as little as 24 hours. . . so to use Section 5 as an excuse that this isn't possible, that's someone that really doesn't want to make the change."

So, as Hebert noted...SOS Handel is a lying sack of Republican sheep shit and still attempting to suppress voters in Georgia. The bullshittery has just begun people...and it's gonna get worse before the end of the night on Tuesday. Fuckers...
This Bitchfest by Unknown at Sunday, November 02, 2008