Rahm and Obama-both part of the Chicago Machine. 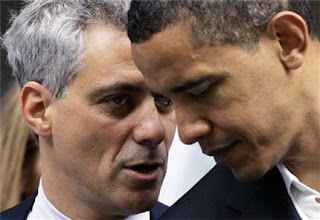 TAP has an interesting read up that gives us a little history of Rahm Emanuel and Obama with regard to the infamous Chicago Machine, aka the Daley family and their place in it.

I personally have never been a fan of Emanuel's. He ran the DCCC which hates liberal ideology with a passion as witnessed by the fact that many times they refuse to fund liberal candidates when there is a centrist democrat running for the same office.

Emanuel loves big business. He adores it in fact. He is a member of the New Democrat Coalition which professes it's love for all things centrist and pro-business. From the TAP writeup:

So why is Obama hiring Emanuel as chief of staff? Probably for the same reason Daley hired him way back in 1989. He's ruthless, cunning, and absolutely unafraid to be a jerk. In fact, I think Emanuel enjoys being a jerk. Moreover, by being a jerk, I predict Emanuel will do a great service for Obama. By the time Emanuel is finished irritating, humiliating, and infuriating folks in Washington, Obama will look like an angel. People will probably like him even more just because he's not Emanuel.

That doesn't make me feel warm and fuzzy, not by a longshot. As a Progressive, I am reserving judgment of Obama until he actually does something as our 44th President. But I tell ya...Rahm doesn't like liberals, not one damn bit. But he does love the corporatocracy.

And that bothers me...a lot.
This Bitchfest by Unknown at Wednesday, November 12, 2008