Thousands of Iraqi's protest against US agreement

We sure as hell don't like it either. From Reuters:

BAGHDAD (Reuters) - Followers of Shi'ite cleric Moqtada al-Sadr marched on Friday against a pact letting U.S. forces stay in Iraq until 2011, toppling an effigy of President George W. Bush where U.S. troops once tore down a statue of Saddam Hussein.

Thousands of demonstrators chanted and waved Iraqi flags in Baghdad's Firdos square, where U.S. forces pulled down a statue of the ousted Iraqi dictator when they took the city in 2003.

Leave them to their own bullshit. Let them kill each other. Just get our troops the hell out of there NOW mutha fuckas. Al-Sadr is a power-hungry bag o' batshit, just like Maliki. They deserve each other. 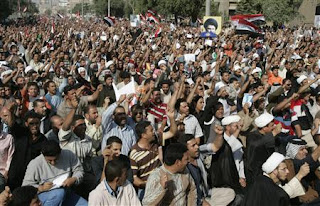 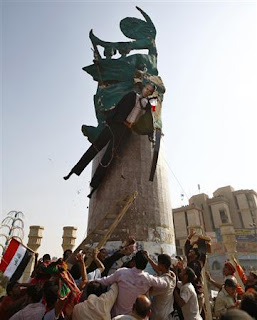 Photos from Reuters.
This Bitchfest by Unknown at Friday, November 21, 2008