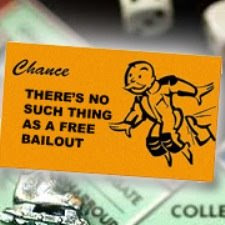 You can review it here. (pdf) Thanks to EmptyWheel for hosting the plan on Firedoglake's servers. The boys from Detroit are getting grilled as I write this, by the banking committee.

Jon Tester asked one of them if they can guarantee that this will be the only bailout money they will need considering the economy.

The exec said no, he can't make that guarantee. Of course he can't..and neither can the financial institutions.

No one can guarantee shit...unless it's a guarantee that it's gonna get worse before it gets better.

That, you can probably take to your bank...if it's still operating or hasn't been bought out by a bigger fish in that pond.

The UAW is willing to take a hit as well:

From the New York Times: "At a news conference in Detroit, the U.A.W.'s president, Ron Gettelfinger, said that his members were willing to sacrifice job security provisions and financing for retiree health care to keep the two most troubled car companies of the Big Three, General Motors and Chrysler, out of bankruptcy."

I don't know the answers and neither does anyone else.
This Bitchfest by Unknown at Thursday, December 04, 2008