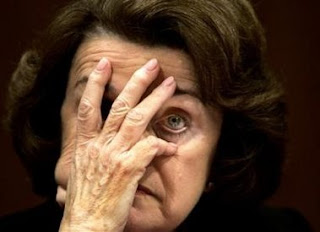 The Senator from CA, Dianne Feinstein, can kiss my hairy ass. She supported all the egregious tactics BushCo used during the last eight years just for starters. I haven't voted for that worthless woman for over a decade to be brutally honest here. DiFi gave her stamp of approval to everything BushCo did that was wrong...torture, warrantless wiretapping, confirming Porter Goss and Hayden...the list is endless.

Screw her and her pov that she should of been consulted on the pick of Leon Panetta for CIA Director. Screw the ole biddy who is basically a DINO if you think about it, based on her voting record alone.

As for Leon Panetta, here is a good writeup that addresses why he is an excellent pick for CIA Director. The CIA has been totally politicized by the Bush Administration for starters. From the Time writeup:

Leon Panetta may not have an intelligence background, but his appointment as CIA director shows that Barack Obama understands the CIA's problems. As a former White House chief of staff, Clinton Administration budget director and eight-term California Congressman, Panetta knows his way around Washington better than most people, and that kind of knowledge is exactly what the CIA needs right now.

Panetta is experienced enough to understand that the CIA was the victim of political manipulation under the Bush Administration. It was the Bush White House that cherry-picked the intelligence on Iraq, not the CIA. Panetta will have the ear of the new President to walk him through all of this and to make the case that there is no point in throwing out the baby with the bathwater. Panetta will also serve as a good counterweight to retired Admiral Dennis Blair, the designated director of national intelligence who is unlikely to streamline the intelligence community or challenge the Pentagon's preeminent position.

So screw you DiFi....hard, bitch. You have lost whatever credibility you once had. I am glad Obama ignored you during the process of picking an Intel Chief. You have shown us that you pander to the most basic fears that Bush and Cheney have been pushing for eight long fucking years, and you are ready and willing to toss all of us under the bus in the name of getting those nasty terrorists. I hope to hell you retire soon..I am sick to death of you. Below is KO and Rachel discussing how DiFi dropped the ball on oversight among other things...

This Bitchfest by Unknown at Tuesday, January 06, 2009