The son of a former president of Liberia now on trial at The Hague for crimes against humanity was sentenced [DOJ press release] to a 97-year jail term in the US Friday by US District Court for the Southern District of Florida for committing torture in Liberia. Charles Arthur Emmanuel, son of Charles Taylor was found guilty by a jury in October on charges that he was the head of a paramilitary group which tortured and killed opponents during the presidency of Emmanuel's father. District Judge Cecilia M. Altonaga handed down the sentence to Emmanuel, a US citizen born in Boston. Acting Assistant Attorney General Matthew Freidrich of the US Department of Justice Criminal Division Criminal Division said of the sentence:

The lengthy prison term handed down today justly reflects the horror and torture that Taylor Jr. visited upon his victims. This case was made in no small part by the courage of individual victims who had the mettle to come forward and speak the truth about what had been done to them . . . Our message to human rights violators, no matter where they are, remains the same: We will use the full reach of U.S. law, and every lawful resource at the disposal of our investigators and prosecutors, to hold you fully accountable for your crimes.

Emmanuel was the first person to be indicted under the 1994 extraterritorial federal anti-torture statute [18 USC §2340A text] permitting US federal courts to charge US citizens or those present in the US for torture that took place overseas.

Hopefully, the incredible irony of the charges and the sentence isn't lost on anyone that reads this blog. I damn near bit a hole in my bottom lip to keep from laughing at what the idiot Freidrich had to say... 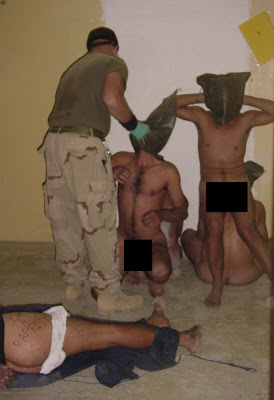