Good News! One of BushCo’s Midnight Regs has been stopped. From MSNBC:

The 77 leases were for areas near Arches and Canyonlands national parks, Dinosaur National Monument, and Nine Mile Canyon, which is sometimes called the world’s longest art gallery for its collection of ancient rock-art panels.

In its first action to overturn Bush administration policies on energy, the Obama administration on Wednesday said it will cancel oil drilling leases on more than 130,000 acres near two national parks and other protected areas in Utah.

“In the last weeks in office, the Bush administration rushed ahead to sell oil and gas leases near some of our nation’s most precious landscapes in Utah,” Interior Secretary Ken Salazar told reporters. “”We need to responsibly develop our oil and gas supplies to help us reduce our dependence on foreign oil, but we must do so in a thoughtful and balanced way that allows us to protect our signature landscapes and cultural resources.”

Below is one of the areas where leases had been sold to drill nearby..Canyonlands National Park. 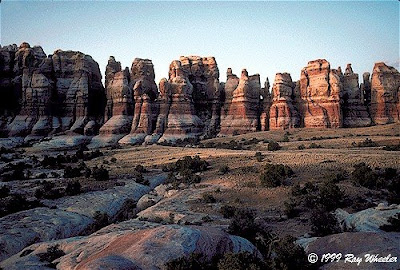 This Bitchfest by Unknown at Thursday, February 05, 2009