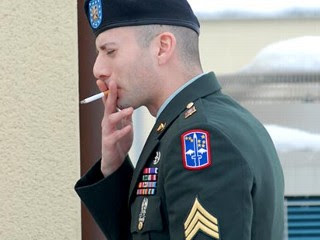 US Army Sgt. Michael Leahy Jr. was convicted Friday on charges stemming from the 2007 deaths of four Iraqi detainees, and was given a life sentence at a court-martial at a US military base in Germany. Leahy will have a possibility of parole after being dishonorably discharged, having his rank reduced to private, and forfeiting his pay. The medic from Illinois had admitted to shooting one of the prisoners but pleaded not guilty to charges of premeditated murder, conspiracy to commit premeditated murder, and obstruction of justice, claiming his lack of sleep and long-term presence in a war zone had made him unable to reason properly.

On Tuesday, a military judge ruled that Staff Sgt. Jess Cunningham, who had been accused as a co-conspirator before his charges were dropped, would be allowed to testify against Leahy. Leahy was among six members of the 1st Battalion, 18th Infantry accused in killings that took place between March 10 and April 16, 2007. The prisoners were allegedly shot in the head while bound and blindfolded before being dumped in a canal. Fellow unit members Spc. Belmor Ramon and Spc. Steven Ribordy pleaded guilty to conspiracy and accessory to murder, respectively, in connection with the incident.

Has justice been served? Partially since not all the perpetrators will do jail time. His defense leaves me wondering if he cracked and PTSD had set in for this Sgt. They did kill humans that were bound and gagged. How many tours did Michael Leahy do before he went off the deep end??
This Bitchfest by Unknown at Monday, February 23, 2009