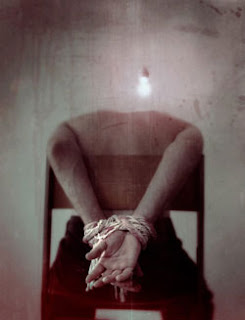 Well, I couldn't stay away from Countdown. Nope, and lemme tell ya..today was one helluva doozy. I learned all about the newly released torture memo's (courtesy of TPM Muckraker) and how Obama has no interest what so evah in prosecuting those who tortured. I will look at the redacted memo's shortly, but let me say this...

President Obama is going down the same road President Ford did, only Obama refuses to go after those who tortured. At least the underlings were prosecuted in the Nixon administration. No such luck with the Obama administration. So no one will be held accountable for torturing..no one.

KO's Special Comment follows, as does his interview with John Dean on the subject. I am horrified that Obama wants to take this route.

But I am not surprised. President Obama has signaled he would lean this way, you just had to pay attention to hear it.

There are people out there that will be able to justify this newest fresh hell brought to us by President Obama..but I am not one of them. I find Obama's decision unconscionable and wrong on many levels. I salute him for releasing the memo's, and allowing us to see into the black hearts of the Bush Administration.

But I damn him and curse him for wanting to walk away from doing the right thing.
This Bitchfest by Unknown at Thursday, April 16, 2009