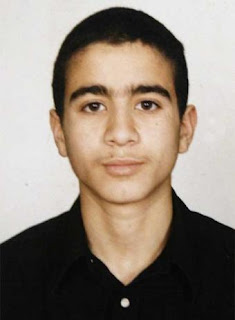 The assholes running the kangaroo court at Guantanamo are still screwing around with the truth, inspite of having a new Commander in Chief. From Jurist:

The US Navy on Friday reassigned Lieutenant Commander William Kuebler, a military lawyer who had been in charge of defending Guantanamo detainee Omar Khadr, after Kuebler filed a formal complaint against a military official overseeing the case. Kuebler had worked on the case for two years before he was fired after alleging that the military's chief Guantanamo defense lawyer, Colonel Peter Masciola, had a conflict of interest in overseeing the case. Kuebler said Masciola should be removed from the case because Masciola said Khadr should also face civil liability for the alleged killing of a US soldier, despite his role overseeing Khadr's defense. Khadr is the only Canadian citizen currently being held in Guantanamo, and Canadian officials have said they may investigate the circumstances surrounding Kuebler's removal.

Kuebler has long criticized Masciola's handling of the case, and in February said that he had prompted an investigation of the defense team's ethics based on Masciola's leadership. In January, a US intelligence official said in pre-trial testimony that Khadr admitted he threw a grenade that killed a US soldier in 2002. He has been charged with murder, attempted murder, conspiracy, providing material support to terrorists, and spying. In January, US President Barack Obama ordered Secretary of Defense Robert Gates to halt all military-commission proceedings involving Guantanamo detainees pending a review of their detentions. That month, a military judge granted the Obama administration's request for a continuance of Khadr's case until May 20.

Khadr was 15 years old when he was tossed in Gitmo and the key thrown away. He is now in his 6th-fucking-year of being held at Guantanamo. Not only was this kid renditioned..he was also tortured. He has spent a quarter of his life behind bars in Guantanamo.

What kind of people torture children? What do they tell themselves so they can look in the mirror each morning?
This Bitchfest by Unknown at Tuesday, April 07, 2009