Look who is calling the kettle black. 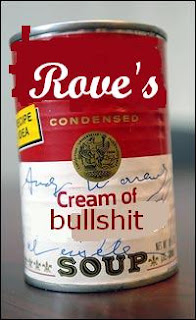 Krazy Karl Rove. This jackass of mythic proportions has the audacity to state in his OpEd and on Faux Noise that Obama has...cough..ethical problems, by accusing the Obama administration of working with MoveOn and Americans United for Change on ads they created and ran.

Does this fuckwit have Alzheimer's? He single-handidly politicized every department and office in the Bush administration for eight years. From ThinkProgress:

In a Wall Street Journal op-ed and on Fox News this morning, former Bush political adviser Karl Rove accused the Obama White House of “ethical problems” in its “hard-nosed push” to “pressure Congress to adopt the president’s budget.” “The degree of direction the White House is exerting over a lobby campaign” is “unprecedented,” claimed Rove, referring to ad campaigns by Americans United for Change and MoveOn.org.

When Fox’s Bill Hemmer asked Rove how this was different from the “contact with outside groups” he had during the Bush administration, Rove replied that “it’s fine to say the White House is focused on getting our message out to these members,” but that it’s another thing to “sit down and coordinate on ad copy.” Watch it: