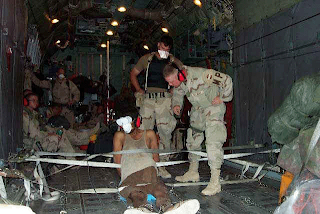 The 9th Circuit Court of Appeals has told Eric Holder NO on using the states secret privilege argument in the rendition case against a Boeing subsidiary.

Bet that just ruined his day! From the Jurist writeup linked above:

The US Court of Appeals for the Ninth Circuit ruled Tuesday that the state secrets privilege does not bar a lawsuit against a company that allegedly provided logistical support for CIA rendition flights. Plaintiffs Binyam Mohamed, Abou Elkassim Britel, Ahmed Agiza, Mohamed Farag Ahmad Bashmilah, and Bisher al-Rawi allege that Jeppesen Dataplan, a wholly owned subsidiary of Boeing, knowingly supported direct flights to secret CIA prisons, facilitating the torture and mistreatment of US detainees. The US Department of Justice (DOJ) intervened in 2007 before the defendant filed an answer, arguing that the lawsuit posed a risk to national security. In overturning the lower court's dismissal of the case, the Ninth Circuit ruled that the state secret privilege must be based on actual evidence in the case, not on what evidence might be involved in the case:

Concluding that the subject matter of this lawsuit is not a state secret because it is not predicated on the existence of a secret agreement between plaintiffs and the Executive, and recognizing that our limited inquiry under Federal Rule of Civil Procedure 12(b)(6) precludes prospective consideration of hypothetical evidence, we reverse and remand.

ACLU is batting a thousand lately..and I do love it! ;)
This Bitchfest by Unknown at Thursday, April 30, 2009