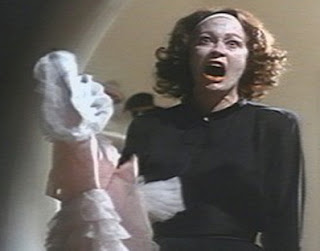 I am not a fan of Mondays. Dunno why, but I just don't freaking like them. After a weekend crammed full of sports it's such a letdown to wake up Monday Morning and have nothing but MSNBC..yuck!

Ok, so I sent Mommy-Dearest a Candygram this morning. I hope the ole biddy doesn't keel over from the shock of receiving something from me on Mothers Day. It's only been 20 years since I last acknowledged her as my mother.

The Ball n' Chain™ is losing his sight. Glaucoma. He is an old, fat, type two diabetic..that doesn't take care of his diabetes, so this shouldn't be a surprise. But it is a shock.

My cross-country trip that was to begin in a week or so is now on hold. I am not mad at him, but I am worried about his dumb ass. The doctors have been treating his glaucoma but it's not responding. Now, if I could talk to the doctors and tell them that the fat fuck doesn't eat right or use his glucose meter or any of the other things diabetics are supposed to do..then they might understand why the drugs aren't working on his friggin eyes.

Perhaps he is tired of living with the biggest pain in the ass this side of the Mississippi. That would be me ya know...

Or he is doing the 'feel sorry for me' bit..and if that is the case..the mutha fucka is going to regret it.

His dog is diabetic too..but we have her in great shape now. She has lost a shit-load of weight. She takes insulin shots twice a day but has gone from 15 cc's down to 3 cc's twice a day. She has already lost her eyesight from the diabetes, but she still motors around like crazy. It makes me keep the house picked up since an errant shoe can cause her a lot of pain when she falls over it. Even the cats are used to her tripping over them. They don't go off on her thank gawd or I would have to box their little ears.

So, I have two old, white, diabetic dipshits to deal with. The dog has no say in her treatment regimin, but the Ball n' Chain™..well, thats another friggin story ain't it?

It's like dealing with a 12 year old..him, not the dog. The dog is getting long in the tooth (12 years) but has more energy and spunk than I have seen in her in seven years. The B&C on the other hand..ah..don't get me started again.

If I didn't love him so much I would be forced to kill him and bury him in the desert somewhere outside of Las Vegas. Isn't he lucky? ;p

As for me..I have lost so much weight..which is supposed to be great, right? You get to buy new clothes, etc. But they don't tell you that you will also lose a whole freaking, fucking cup size in the bra dept AND my underwear won't stay up. I am tired of pulling on my drawers every third step..really, I am. At least I still have more tata's than any of my sisters. Those bitches are FLAT! ;)
This Bitchfest by Unknown at Monday, May 04, 2009