Playing hockey with a brussel sprout.. 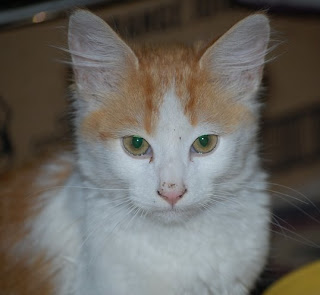 It's been one of those weeks with the critters. A few of them are pms'ing bad and taking it out on the others. Spanky, here on the right, is on my last nerve as the youngest and most wily of the housemates.

Charlie and her brother Jack are still picking on Scooter, who then takes it out on one of the others..you know..shit rolls down hill.

When the DirectTv guy came over to take us off cable and into the world of satellite television, every single one of the cats ran under the bed and stayed there for hours. Thank Buddha I have a king-sized bed, or they wouldn't of all fit.

Junior, the DirectTv guy was nice and professional but the nitwit had a problem with remembering to close the screen door behind him. The Ball n' Chain™ was tasked with watching to make sure the door got closed and none of the house felines escaped everytime Junior had to go in or out.

After he left, we did a headcount and thats always fun around here...not! But they were all eventually counted for. 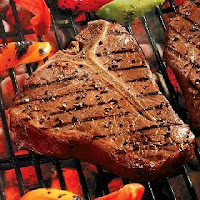 Last night, we splurged and bought two nice fat steaks and two gigantic potato's to bake..er..microwave. When the BnC went out to clean the grill, he found out that a central part was broken and we couldn't use the bbq grill to cook our magnificent steaks.

So we then began an online search for a quick fix...aka a new but very cheap charcoal grill to replace our expensive and now useless gas grill. Praise Buddha we found one..just one problem..

It needed to be put together. The BnC and I are not mechanically inclined..to say the least.

It took us 3 hours to put together a friggin cheap-ass charcoal grill with four legs. I shit you 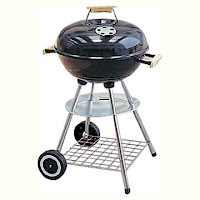 not..Three Fucking Hours. At one point I figured we might be eating those steaks around midnight.

We got to eat them around 9pm..not too bad. Grilling in the dark is not without it's problems. I like my steak rare..but cold and still mooing doesn't do a thing for me. The middle has to at least be cooked slightly and friggin hot for christs sake. So, after numerous checks with a flashlight, my steak was cooked and we finally sat down at the dining table to eat.

At one point I got up to get something to drink with my wonderful meal.

The BnC isn't the best at paying attention, so when I heard him scream Spanky's name and tell him to 'drop it'..I figured my steak was off my plate and being dragged around the floor by the Spankster. Believe me..he has dragged some large food items off the counter..huge things that look as big as he is. Pee Wee likes to drag an entire cube of butter into the living room and eat it and Bobby Joe has run off with a whole slice of pizza before..but I digress.

My steak was safe and untouched. We ate our meal and then I drug my tired ass into the bedroom to lay down and watch some sports on the boob tube. Dishes are NOT my responsibility and I didn't give a shit if they got done last night or not.

They didn't get done last night. The BnC was tired and cranky and wasn't in the mood to wash dishes. Believe me when I say..I did not care one whit. Until I got up this morning to slop the hogs...

That's when I found Pee Wee and Spanky playing hockey on the kitchen floor with an errant brussel sprout. The looked at me, screaming profanities at them, looked at the brussel sprount and hauled ass for a safe house..er..safe hiding place.

I had left 4 brussel sprouts on my plate. There were none on my plate when I looked this morning.

Nothing says fun like hunting down 3 lost brussel sprouts at 8am on a Sunday morning.

I found them all..and I am going back to bed. Have a good Sunday m'dear readers. ;)
This Bitchfest by Unknown at Sunday, June 07, 2009