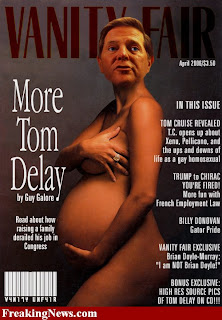 Those wonderful folks at CREW (Citizens for Responsibility and Ethics in Washington) have filed an FOIA request (Freedom of Information Act) with the jackholes at the DOJ demanding the doc's to find out exactly why those fuckwits refused to prosecute one of the biggest, most corrupt former members of Congress...Tommy 'hottub' Delay. One would think Obama's hue and cry about transparency would make this request a no-brainer. From CREW's website:

Why did disgraced former Congressman Tom DeLay (R-TX) never face federal prosecution? The public has a right to know, but the Department of Justice isn’t telling. Citizens for Responsibility and Ethics in Washington (CREW) has filed a Freedom of Information Act request with the Department of Justice (DOJ) requesting all documents and communications related to the five year investigation into the former Texas lawmaker and his associates. Mr. DeLay is slated to face state charges in Texas later this month; as a result, CREW asked DOJ to expedite a response to the request.

“One of the most corrupt members to ever walk the halls of Congress will never have to answer for operating the House like a pay-to-play casino. The American people deserve to know what evidence the Department of Justice collected on Mr. DeLay and why that evidence was not sufficient to charge him,” said Melanie Sloan, CREW Executive Director. “The Department of Justice has not made prosecuting crooked government officials a top priority. The Public Integrity Section lacks the staff and resources necessary to prosecute even some of Washington’s demonstrably most unscrupulous leaders.  The Obama administration must ensure this section has resources it needs to do its job properly. After all, if Tom DeLay can get away with brazenly selling legislative assistance to Jack Abramoff, who knows what other scheming self-interested members of Congress might try?”

I don't know about you folks, but I am friggin dying to know why Eric Holder and company refused to prosecute this corrupt bag of batshit.
This Bitchfest by Unknown at Tuesday, October 26, 2010