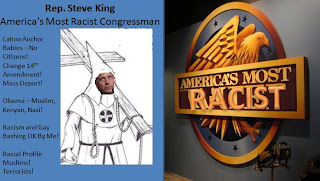 
US Rep. Steve King (R-IA) on Wednesday introduced legislation [HR 104 materials] designed to restrict the automatic grant of citizenship to children born on US soil. The bill, designated the "Birthright Citizenship Act of 2011," seeks to deter illegal immigration by amending the Immigration and Nationality Act (INA) to limit citizenship only to those children with at least one parent that is a citizen, legal resident or an alien member of the US military. King stated that the bill is necessary to reduce the financial incentives for illegal immigration and curtail the 'birth tourism' industry. The American Civil Liberties Union described the measure as an attempt to undermine the 14th Amendment of the US Constitution, which states that, "All persons born or naturalized in the United States...are citizens of the United States." The bill currently bears 26 co-sponsorships, though further action has not yet been scheduled.

As a Nutter U alum, King  is constantly mouthing off about immigrants, immigration and his personal favorite, all Muslims are probably terrorists. Steve King is now the vice chairman of the House Subcommittee on Immigration. Thankfully, the GOP refused to put King in charge of the subcommittee, fearing his diatribes would alienate Latinos and Hispanics.
This Bitchfest by Unknown at Sunday, January 09, 2011