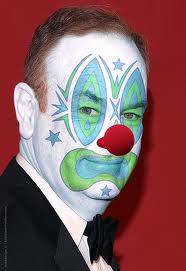 Yesterday, whilst I was awaiting the start of the Super Bowl and of course the commercials, my telly scared the shit out of me when it filled with the vision of Bill O'Reilly. I thought I was having flashbacks from some bad acid I took back in the 70's for a brief second, then I saw President Obama and heaved a sigh of relief.  Now, I won't call Bill-O the clown a journalist because that jackass is as far from that word as you can get. Hell, my cat Scooter Lee is closer to a journalist than Bill-O, but I digress.

Forty-three-fucking-times O'Reilly interrupted Obama. 43! I mean, seriously...wtf asshole? And the questions were stupid in the way he asked them for christs sake, because he didn't really ask Obama questions... as he made them statements of fact. Sweet Jaysus Bill-O are you stupid or just acting the part you mental midget? Anyway, enjoy Lawrence and Howie ripping into BillO.

Visit msnbc.com for breaking news, world news, and news about the economy
This Bitchfest by Unknown at Monday, February 07, 2011