1st amendment rights trump all others according to SCOTUS. 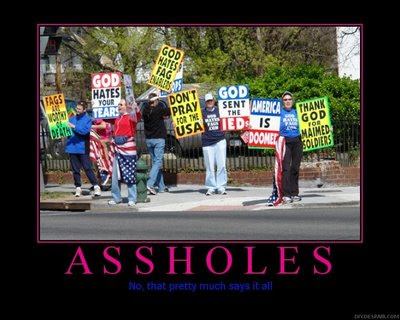 SCOTUS ruled for the pigs at Westboro this morning. From TPM:


"Simply put, the church members had the right to be where they were," Chief Justice John Roberts wrote on behalf of the majority. "Westboro alerted local authorities to its funeral protest and fully complied with police guidance on where the picketing could be staged. The picketing was conducted under police supervision some 1,000 feet from the church, out of the sight of those at the church. The protest was not unruly; there was no shouting, profanity, or violence."

The court's decision came after a hearing on the case of Albert Snyder, the father of a Marine who sued the church for picketing his son's funeral in October. There was universal condemnation of the Church's message, but ultimately the court found that the First Amendment protected the church's protests.

Don't hand me the horseshit that free speech is painful. Hate speech is wrong, its just fucking wrong.  The right to spew hate and venom should not outweigh all other rights.

The ruling was an 8-1 decision. Only Alito voted against the fucktards at Westboro. Color me surprised as hell over that. Alito had the following to say over this ruling:


"In order to have a society in which public issues can be openly and vigorously debated, it is not necessary to allow the brutalization of innocent victims like petitioner,"