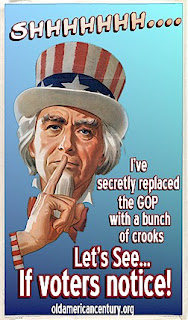 Oh sweet irony of ironies. A Rethug that did what they accuse the D's of (and have never proved) all the time...voter fraud. From the NYT:

The indictment, announced by two special prosecutors, prompted immediate, bipartisan calls for Mr. White to resign. But Mr. White, a Republican who took office two months ago, said he would remain in the post as he contests the charges.

At issue was Mr. White’s listing his ex-wife’s address rather than his own on official documents, including his voter registration, allowing him to keep his seat on the Fishers Town Council after he had moved outside his district and remarried.

The seven felony charges include voter fraud, perjury and theft relating to his continuing to accept a salary as a Town Council member. If convicted of any count he would automatically be removed from office.

Removed from office, give me an effin break. How about wearing an orange jumpsuit and doing the perp walk? As much as the right has blathered on about voter fraud by groups that support Democrats, this asshole deserves nothing less than jail time.

And he won't step down. Like Randy Duke Cunningham, he will hold on for dear life. Randy's kool-aid drinking voters in northern San Diego county actually elected that crooked fuck whilst his trial was taking place. I swear, I almost shat myself when he got re-elected. But then..I danced for happy happy joy joy when he went to jail and lost everything.

Lets hope we can do the same for old Charlie White of Indiana.
This Bitchfest by Unknown at Friday, March 04, 2011