The Shrub, aka George Bush,also relied heavily on the Heritage Foundation's economic forecasting models. We all know how well that shit worked out, but let's look at it again, from AmericanProgress.org;

Anyone can make an economic forecasting model. But the true measure of a model’s worth is how accurately it forecasts future economic developments. Before looking at what their model predicts for the Ryan budget proposal, it’s important to understand how well this model has performed in the past. Heritage analyzed the 2001 and 2003 Bush tax cuts using a similar dynamic scoring methodology. In 2001 they predicted that if the Bush tax cuts were implemented, between FY 2002 and FY 2011 income for a family of four would increase by $4,544, investment in our economy would grow 1.9 percent a year, gross domestic product would grow by an average of 3.3 percent per year, more than 1.6 million more jobs would be added, and the unemployment rate would average to 4.7 percent over the 10-year period. But that’s not what happened.

In fact, the period following the Bush tax cuts yielded one of the worst economic performances, as investment growth, employment, and output were slower than in any other economic recovery in the post-World War II era. Further, rather than growing by nearly $5,000, for the first time in any economic recovery since the end of World War II, our nation’s middle-class families saw their incomes fall after factoring for inflation.

The actual feeble performance of our economy under the Bush-era tax cuts was a far cry from what the Heritage Foundation’s economic model had predicted. Take, for example, Heritage’s 2001 forecasts for job creation and GDP growth effects from the Bush tax cuts. To measure the effect of the Bush tax-cut policies, Heritage’s forecasts and actual economic performance are compared to a baseline scenario of what would have happened in the absence of any policy changes. Heritage’s model did not fare well in predicting the job-creation effect of the Bush tax cuts (see Figure 1). 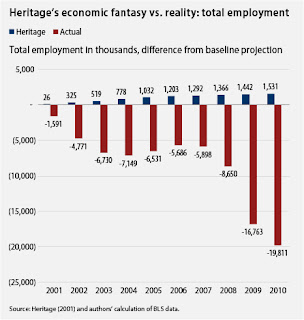 There are so many more reasons why the neocons at the Heritage Foundation can't predict shit, so I suggest reading the AmericanProgress piece I linked above for more reasons why no one with two brains cells to rub together would buy into their projections.
Paulie also plans on screwing the middle and lower classes even more and calling it tax reform.
He also plans on dumping the Medicare load on the elderly and he wants to do away with the entire program....all the while giving the rich an even bigger tax break than they have now...what a guy eh? The winners and losers are laid out here (pdf) by the Center for Economic and Policy Research (CEPR).
What a Slimey fuck.
This Bitchfest by Unknown at Thursday, April 07, 2011