T Paw, King of the GOP Clowns, has his own budget plan. 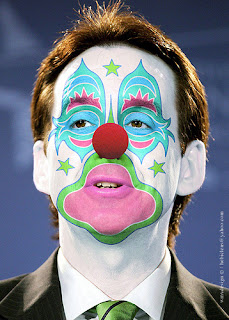 Couple of weeks ago, I wrote about Timmy Paw's brilliant strategy to let the federal government default on it's financial obligations. Today's doozy is even better, which means it's worse. It is his plan for our federal budget which the jackass delivered in his speechifying in Chicago(text). If you liked Paul Ryan's budget plan, you are just gonna love the shit out of Timmy Paw's.  From TheProgressReport:


Today, on the 10th anniversary of the Bush tax cuts no less, we have something far worse to present: former Minnesota Gov. Tim Pawlenty’s plan for the economy. Pawlenty’s plan wins the triple crown: it’s more radical than Ryan, costs three times more than the Bush tax cuts, and still means a tax increase on the middle class. Here are the main points of the Pawlenty plan, which he outlined in a speech this morning in Chicago:
The price tag for all of these tax cuts? More than triple the cost of extending just the Bush tax cuts:  a whopping $7.8 TRILLION over 10 years, according to the Center for American Action Progress Fund’s director for tax and budget policy, Michael Linden.  And that comes in addition to the $2.5 trillion that a full extension of the Bush tax cuts would also cost.

If you haven't stroked the hell out yet.. We have reviews of this fuckwitted mess already.

Ezra Klein calls it a joke and a fantasy. I would call it a fucking joke, but Timmy Paw isn't joking. Jennifer Rubin, a conservative, states his spending plans are rather vague and gimmicky. M'dear Ms. Rubin, I would rather not even think about it. Adam Levitin, a Professor at Georgetown, has the following as his headline: Tim Pawlenty’s Plan to Destroy the World. Short and sweet Professor.

TPaw plans on gutting Social Security and Medicare. To say Social Security as we know it will disappear would be more precise. Medicare will also cease to exist..an idea who's time will never come.

But if you are a rich mutha fucka, m'dear reader..you will adore Timmy Paw's plan. I am sure the Koch Brothers are creaming themselves over this, as is anyone else in the top two percent.