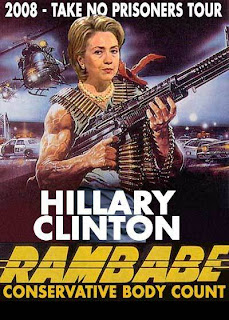 Remember last week when I brought up the disenfranchised delegates from FL and MI? Well, here is an interesting fact via Alternet, that is sure to have a chilling effect on whether those delegates, now all pledged to sHillary, get seated or not:

That leads us to the three co-chairs of the DNC Credentials Committee: Alexis Herman, James Roosevelt, Jr. and Aliseo Roques-Arroyo. All three of them served in the Clinton Administration. Okay, as far as we know they are all reputable, upstanding people, but if you were Hillary Clinton and these three people worked for you and your husband during the 8 presidential years Hillary includes on her "35 years of experience," wouldn't you feel like you might have some influence on the three co-chairs? After all, the decision of the DNC Credentials Committee will be political; this is not a judicial process.

I get a headache just thinking of what this means to the nomination process for the Democrats..the fix is in methinks..
This Bitchfest by Unknown at Saturday, February 09, 2008