Why its Confederate Memorial Day folks!!! 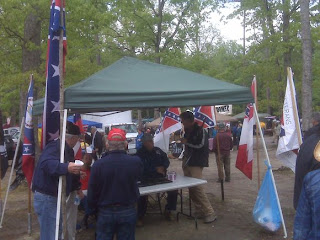 If one poster to a Virginia blog has his way, we'll all be "singing Dixie, Carry Me Back to Old Virginia, and flying Battle Flags along with Old Glory" -- for the sake of economic development.


Virginia could be making so much money off of its connection with the Confederate era. During the 150th Anniversary (2010-2015) we should put into place as many recurring festivals, tours, battle re-enactments and other annual or ongoing events that will attract domestic and international tourists to the Old Dominion.

People are NOT going to throng to Virginia to see the White guilt programs and slave path tours, proposed by Ed Ayers and the rest of the "New South" apologists.

The things that will attract tourism are fun festivals like, Hanover's Dixie Days, battle re-enactments and musical programs.

I have read research that said that we could add a billion bucks to our Central Virginia economy by promoting our Confederate era tourism.

Everyone should be singing DIXIE, Carry Me Back to Old Virginia, and flying Battle Flags along with Old Glory from Virginia homes and businesses.

All of our jobs have been sent to Communist China. Our Confederate heritage may be the only economic engine that we have left!

Garber gives his URL as SCV.org, for Sons of Confederate Veterans. That's the group that pushed for Virginia to get a Confederate History Month, with or without bringing up that old slavery thing.

Christ....what a bunch of morons. Who in the blue hell celebrates losing a damn war?? I lived in northern VA (McLean) for years, and thankfully never ran into any of these brain-dead assholes.
This Bitchfest by Unknown at Monday, April 26, 2010