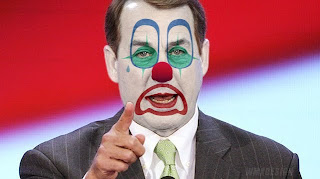 Here is Bakersfield, CA. I knew I was living in the reddest part of Cali...but the whole friggin movement found life here? From The NewYorker writeup, sent to me by my blogger bud RJ:


John Boehner’s introduction to the political force that would make him the Speaker of the House of Representatives came on a cool April afternoon in 2009, on the streets of Bakersfield, California. Boehner, the Republican House leader, had come to town for a fund-raiser for his colleague Kevin McCarthy, who represents the area. The event was scheduled for tax day, April 15th—the date targeted for a series of nationwide protest rallies organized by a loosely joined populist movement that called itself the Tea Party. One rally was to take place in Bakersfield, and Boehner and McCarthy decided to make an appearance. “They were expecting a couple of hundred people,” Boehner recalls. “A couple of thousand showed up.”

The two congressmen witnessed a scene of the sort that played in an endless loop across the country for the next eighteen months: people in funny hats waving Gadsden flags and wearing T-shirts saying “No taxation with crappy representation,” venting about bailouts, taxes, entrenched political élites, and an expanding and seemingly pampered public sector. (Noticing an open window in a nearby government office building, some in the Bakersfield crowd shouted, “Shut that window! You’re wasting my air-conditioning!”) Although Bakersfield is in one of the most conservative districts in California, the Tea Party speakers assigned fault to Republicans as well as to Democrats. The event’s organizers had been advised that Boehner and McCarthy would be there but did not invite them to speak.

For Boehner, the Bakersfield rally was a revelation. “I could see that there was this rebellion starting to grow,” he says now. “And I didn’t want our members taking a shellacking as a result.”

Bakersfield, and Kern County in general, is loaded with uneducated, bigoted rightwing nutters. An example: the percentage of high school students that go on to college is a pathetic 19% here, our dropout rate is 26%. If that doesn't tell you something about the area, nothing will.

Arnold Schwarzenegger, during his reign as Governor, came here at least once a month to speak to the big corporate farmers and the oil barons. California's horrible employer-favoring Workers Compensation laws, which were changed by Ahnold, were hatched here by Ahnold and fuckers that own Grimmway Farms.

So, blame it on Bakersfield folks...John Crocodile-tears Boehner loves Bako and it's unwashed masses that consistently vote against their own self-interests and probably always will.
This Bitchfest by Unknown at Wednesday, December 15, 2010