Serving a constituency-but which one? 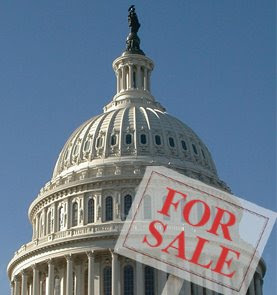 With the news that the National Association of Manufacturers (NAM) will appeal a ruling handed down last week by the courts, it gives one pause to consider why they would have a problem with the new law regarding lobbying. The law in question is the Honest Leadership and Open Government Act (HLOGA). In fact, the NAM folks are so verklempt about this ruling they are actually going to seek an emergency stay of the decision. Lets see how one of the NAM faithful spins this shall we? From the piehole of their fearless leader comes this:

"We remain convinced that many of the law's burdensome and intrusive disclosure requirements will have a serious chilling effect on the constitutional rights of our members," said former Michigan Gov. John Engler (R), the NAM's president, in a statement. "We are committed to protecting the rights of everyone in this country, including those who work for manufacturers, to freely associate and to exercise their First Amendment rights without the government interfering with or chilling them."

Oh thats right, their First Amendment rights are being tromped on. Sweet Jesus, how can we allow that?

Well, I'll tell you how, because the rights of the whole trump the rights of a few special interest groups which represent corporations not people, thats how. I am sick to death of these sycophants painting these issues as a 'rights' issue. It's about disclosure, its about shining a sharp beacon of light into the beady rat eyes of the few who wish to push their will and interests on our elected officials. I like how J. Gerald Hebert, Campaign Legal Center Executive Director phrased it in his statement about Judge Colleen Kollar-Kotelly's ruling last week in the U.S. District Court of the District of Columbia. Part of his spot-on remarks below:

“The National Association of Manufacturers' (NAM) attempt to gut disclosure provisions of the Honest Leadership and Open Government Act (HLOGA) was a blatant attempt to keep the public in the dark regarding those who spend huge amounts of money to influence policy anonymously. The court recognized clear precedent that the disclosure provision serves the compelling governmental interest in providing full disclosure of lobbying activity and in protecting the integrity of the legislative process.”

I think, no I know, the words of Mr. Hebert ring true with the intelligent citizens of this nation. Aren't we sick to death of cronyism and special interests ruling our Congress? Don't we want equal representation under the law? Because we aren't getting it, and we haven't for decades. Our current administration is a government for the Corporations and by the Corporations. Clinton was a subscriber to that doctrine as well, don't kid yourselves, as was Bush41 and Reagan.

The problem however is the Supreme Court is stacked with Bushie's that will most likely cater to the whims of these greedy corporations and their lobbying arms. This will undoubtedly be taken all the way to the Supreme's, you can take that to the bank. These guys won't give up until the last jurist has listened to them bitch, whine and complain about how their rights are being subverted by this law.

A law that protects we, the people, from pandering and special interests. A law that will hopefully keep Jack Abramoff-like fools out of the halls of Congress. It's not the end-all but its a start. It starts by keeping these bastards honest, if that is even possible. Their pandering self-interests must be held up to scrutiny that everyone can see, so that the Congress critters can't take their money and give them free rein to write our laws so that they only benefit the corporations, as they have for decades and decades.