Matt Taibbi is a god. 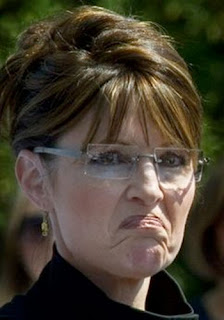 Ok, perhaps not a god, but he is a manly man among men. His recent Alternet article on Sarah Palin is a wonderful thing to behold..his adjectives, nouns and verbs bitchslapping her and her 'base' like no tomorrow. Just the opening two paragraphs for your enjoyment:

I'm standing outside the XCEL ENERGY CENTER in St. Paul Minnesota Sarah Palin has just finished her speech to the Republican National Convention, accepting the party's nomination for vice president. If I hadn't quit my two-packs-a-day habit earlier this year, I'd be chain-smoking now. So the only thing left is to stand mute against the fit-for-a-cheap-dog-kennel crowd-control fencing you see everywhere at these idiotic conventions and gnaw on weird new feelings of shock and anarchist rage as one would a rawhide chew toy.

All around me, a million cops in their absurd post-9/11 space-combat get-ups stand guard as assholes in papier-mache puppet heads scramble around for one last moment of network face time before the coverage goes dark. Four-chinned delegates from places like Arkansas and Georgia are pouring joyously out the gates in search of bars where they can load up on Zombies and Scorpion Bowls and other "wild" drinks and extramaritally grope their turkey-necked female companions in bathroom stalls as part of the "unbelievable time" they will inevitably report to their pals back home. Only 21st-century Americans can pass through a metal detector six times in an hour and still think they're at a party.

Taibbi is an avowed hater of all things political, but it's his beat. That makes him a great choice as a reporter for this silly season. He goes after the Dems with just as much zeal as he does the Rethugs. He skewers them all with his biting prose. His paragraph on the American Dream and it's inhabitants is spot-fucking-on:

I stared at her open-mouthed. In that moment, the rank cynicism of the whole sorry deal was laid bare. Here's the thing about Americans. You can send their kids off by the thousands to get their balls blown off in foreign lands for no reason at all, saddle them with billions in debt year after congressional year while they spend their winters cheerfully watching game shows and football, pull the rug out from under their mortgages, and leave them living off their credit cards and their Wal-Mart salaries while you move their jobs to China and Bangalore.

Speak it Brotha! Go read it now, its long but its friggin worth it people. ;) H/T to Betmo for emailing me the linkage to Taibbi's article. Thanks sweetie!

Now, the neoconservative base is turning on Caribou Barbie, with Kathleen Parker ripping her a new one in her recent column. I howled with delight whilst reading it. Some money quotes:

Palin didn’t make a mess cracking the glass ceiling. She simply glided through it.

It was fun while it lasted.

Palin’s recent interviews with Charles Gibson, Sean Hannity, and now Katie Couric have all revealed an attractive, earnest, confident candidate. Who Is Clearly Out Of Her League.

No one hates saying that more than I do. Like so many women, I’ve been pulling for Palin, wishing her the best, hoping she will perform brilliantly. I’ve also noticed that I watch her interviews with the held breath of an anxious parent, my finger poised over the mute button in case it gets too painful. Unfortunately, it often does. My cringe reflex is exhausted.

Palin filibusters. She repeats words, filling space with deadwood. Cut the verbiage and there’s not much content there. Here’s but one example of many from her interview with Hannity: “Well, there is a danger in allowing some obsessive partisanship to get into the issue that we’re talking about today. And that’s something that John McCain, too, his track record, proving that he can work both sides of the aisle, he can surpass the partisanship that must be surpassed to deal with an issue like this.”

Woot! Don't cha just love it when they eat their own?

This Bitchfest by Unknown at Saturday, September 27, 2008