I direct your attention to ... 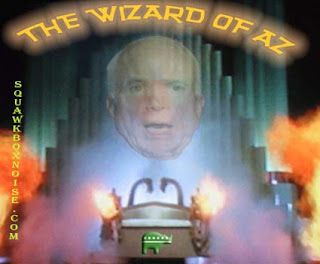 The man behind the curtain, John McCain. His name is at the top of the ticket and all the literature and ads the campaign puts out. The buck stops with his friggin ass.

And that doddering ole fuck needs to get a firm grip on reality. His campaign is spiraling out of control. People are talking major shit and make no mistake..its all shit. He acts like he is above the fray, but baby....its you on the line..your entire career is on the line.

And I wonder how in the hell it will survive this smarmy-friggin-campaign dude.

I really do. Because if you, John Sidney McCain aren't the man behind the curtain..he's fucking you bad dude..seriously.

In other news, Clyde is sans lampshade and much happier. If we can just get him to quick licking his ass all will be right in the world..or that small part of it.

Thank Gawd for feline tramadol..who knew? ;)
This Bitchfest by Unknown at Tuesday, October 21, 2008