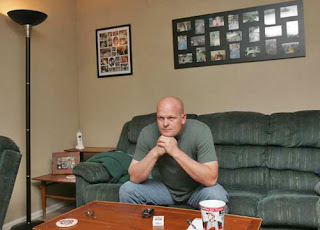 I have nothing against plumbers, hell my son is one. What I don't get however is why Joe would think that McCain would represent Joe's best interest.

Joe isn't one of the top one percent...at least I don't think he is since he has worked for that company for decades and supposedly now wants to buy it. From ABC:

ABC News' Chris Bury is outside Toledo, near the home of Samuel Joseph Wurzelbacher, aka "Joe the Plumber," and reports that Wurzelbacher -- such a key part of Sen. John McCain's critique of Sen. Barack Obama's economic proposals -- acknowledged that he wants to purchase the plumbing business for $250-280,000, not that he would net that much in profits.

He would make much less, he said.

Which would seem to indicate that he would be eligible for an Obama tax cut, not that he would be subject to the tax increase from 36% to 39% Obama would impose on those making more than $200,000 per person, or $250,000 per family.

Wurzelbacher this morning told ABC News' Diane Sawyer that he was talking about, in Diane's words, the prospect, the hope that someday he would make $250,000.

"Well, exactly," he said. "Exactly. I mean not that I don't want to be taxed. You have to be taxed. But to -- just because you work a little harder to have a little bit more money taken from you, I mean, that's scary. You know as opposed to other people. I worked hard for it. Why should I be taxed more than other people?"

Oh, I get it now...Joe hopes to one day make a lot of money...once again, its people voting against their own current self-interest because they hope one day they will be part of the top echelon of rich folks.

If you read the rest of the writeup Joe uses the word socialist to describe Obama's tax plan. So really, Joey is just another Republican that wants to keep all his money and fuck everyone else..kinda like John McCain. Joe is just another part of the Rethug 'base'.

Update: Joe doesn't have a plumbing license, although he is supposed to in order to do work in the Ohio, according to the ToledoBlade. Watch Joey talk about socialism below.


Oh and Joe is registered as a Rethug according to the Toledo article and makes no where near 250K a year...So, yeah..Joey is a Rethug lovin fool...bye Joe..don't let the 15-minutes-of-fame door hit you in your stupid ass on the way out.