Palin gets a slap on the wrist... 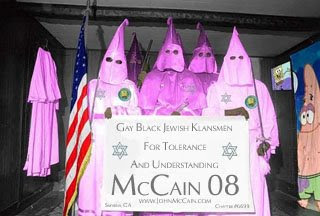 She is guilty only of ethics violations. So..like McCain in the Keating Five Scandal...she will probably only get a slap on the wrist.
The Public Record has more..

Update: Here is the cough response from the McCain camp, via TPM:

"Today's report shows that the Governor acted within her proper and lawful authority in the reassignment of Walt Monegan," said Palin spokeswoman Meg Stapelton. "The report also illustrates what we've known all along: this was a partisan led inquiry run by Obama supporters and the Palins were completely justified in their concern regarding Trooper Wooten given his violent and rogue behavior. Lacking evidence to support the original Monegan allegation, the Legislative Council seriously overreached, making a tortured argument to find fault without basis in law or fact. The Governor is looking forward to cooperating with the Personnel Board and continuing her conversation with the American people regarding the important issues facing the country."

Fuck you John McCain and your little dog Sarah too. The BIPARTISAN group that led this inquiry said you and the First Dude fucked up. You handpicked the assholes on the Personnel Board..so its no wonder you will love talking to them. Get a grip trollop...you fucked up and let your husband run the show on this issue.

This Bitchfest by Unknown at Saturday, October 11, 2008