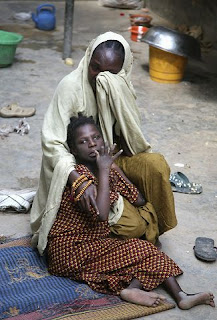 They are cold blooded killers and yet..they have the audacity to say it was ethical? Are they serious? From Jurist:

Officials from Nigeria and from US pharmaceutical company Pfizer said Monday that they hope to reach a settlement agreement by the end of next month over allegedly illegal clinical trials conducted in Nigeria by the drug company in 1996. The national government and the state of Kano filed separate lawsuits in 2007 accusing Pfizer of administering meningitis medication to 200 Nigerian children - including 100 with the then-experimental antibiotic Trovan - without the authorization of the Nigerian government or the consent of the patients' guardians. They also charge that the testing killed 11 children and incapacitated 181 others, and demanded a total of $8.5 billion in damages. Pfizer has denied the charges and said that the company's actions were both ethical and beneficial . Pfizer continues to deny legal liability. Reuters has more. AFP has additional coverage.

Last year, a Nigerian court rejected a request by Pfizer to dismiss the Nigerian government's lawsuit on technical grounds. Also last year, criminal court proceedings against Pfizer were suspended at the request of prosecutors, who needed more time to prepare for trial.

I think Pfizer's CEO and head fucktard should be required to be a guinea pig for any drug trial which gets used on children or non-consenting adults.