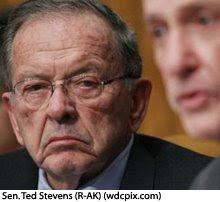 MSNBC has announced the jury returned a verdict...guilty of lying ole Teddy Stevens is. More info as it becomes available.

Update: Its available. Per ABC News:

A federal grand jury indicted Stevens, 84, in July on seven counts of making false statements, for allegedly lying on U.S. Senate financial disclosure forms for the years 1999 to 2006.

The jury of eight women and four men deliberated for five hours Monday before returning guilty verdicts on all seven counts.

Each charge carries a maximum five years in prison and $250,000 fine.

But Teddy will probably never do a day in jail...wanna bet? Oh, and check this out...he can still be reelected and serve! From MSNBC:

Despite being a convicted felon, he is not required to drop out of the race or resign from the Senate. If he wins re-election, he can continue to hold his seat because there is no rule barring felons from serving in Congress. The Senate could vote to expel Stevens on a two-thirds vote.

That, my friends, is total horseshit. Also get this, from McClatchy:

Now, voters will decide whether Stevens, who's represented the state in the Senate since 1968 and before that helped usher in statehood for Alaska, should continue to serve as their senator. For the first time in his career, Stevens faces a competitive re-election fight, against Democratic Anchorage Mayor Mark Begich.
*snip*
The guilty verdict will complicate not only his re-election bid but also the remainder of his term in the Senate. His colleagues have the option _ never exercised _ of voting to expel him before his term ends in January. Four U.S. senators have been convicted of crimes, historians note, but not one has received a presidential pardon.
*snip*
The Justice Department has charged 11 people in connection with its corruption probe in Alaska, including five former and current state legislators in Alaska. Other than Stevens, five pleaded guilty, three were convicted by juries in Alaska and two await trial.

I can't wait for Nov 4th. I want to see what Alaskan's decide on this bag o batshit.