For all your election night needs online...HuffPo! 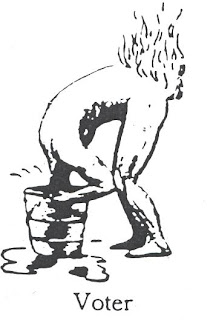 Seems the Huffington Post folks will be working overtime tonight to supply us with election data. Nice!

Once the polls start closing, you can check out the exit polls here. From their site:

If the networks are unwilling to call a given state, an examination of the exit poll data can often give you a clear signal of the ultimate results. The state-by-state exit polls released after poll closings will have large samples and should not suffer the defects that plagued the early findings in 2004 which pointed to a solid Kerry victory nationwide. (CNN and MSNBC have exit polls that are relatively easy to negotiate.)

For additional help, HuffPost has election night widgets from Google, CNN, and MSNBC that will allow you to watch the electoral vote count and the congressional balance of power with the national U.S. map or choose a state and see how individual counties are voting.

At 7:00 P.M. ETthe polls will close in Virginia, Kentucky, Georgia and Indiana.

So, all the fun begins at 7pm eastern...4pm left coast! Some exit poll stuff from HuffPo:

The first exit polls for the 2008 election have been released -- not candidate poll numbers yet, but rather perceptions on particular issues -- and, as much as they can offer insight, the numbers look generally good for Obama.

On a national level, the key concern to most voters, far and away, was the economy, which 62 percent of respondents said was foremost on their mind. This is considered to be Obama's strength.

Iraq, once thought to be the chief issue of the election, was chosen by only 10 percent of voters are their primary concern. And among that subset of voters, Obama had a 2-1 lead.

Meanwhile, nine percent of voters said terrorism was the top issue -- one of McCain's few strong-suits -- the same number who listed health care.

There are some other interesting numbers to glance over. More than a quarter of voters -- 27 percent -- said that they had been contacted by the Obama campaign. Fifty-one percent said they believed government could be doing more to fix the problems of the country (43 percent said less). And for all that "who is Barack Obama?" criticism, more voters were scared of a potential McCain presidency -- 30 percent -- than an Obama win -- 23 percent.

Also... Sarah Palin proved to be a drag on the ticket. Just 38 percent believe that the Alaska Governor was prepared to be President, far less than the 67 percent who said Joe Biden was prepared.

On a macro-level: 76 percent of voters believe the country is on the wrong track, while President Bush's approval rating stands at 27 percent. (As MyDD noted, Bush's approval is down from 53 percent in 2004 and 42 percent in 2006.) Change voters, finally, made up 35 percent of the electorate while 30 percent wanted someone who shared their values.

I am tired of waiting..I want some numbers damn it!! ;p

This Bitchfest by Unknown at Tuesday, November 04, 2008