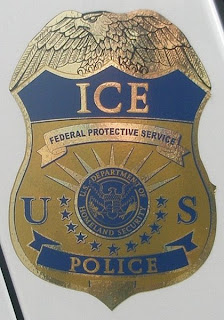 And I bet they are damn proud of that number too. From Jurist:

Nationwide, ICE deported 349,041 immigrants during the 2008 fiscal year ending September 30, as opposed to the 288,663 reported as removed in the 2007 fiscal year and 2004’s 174,000 deportations. The reports, released by local ICE offices throughout the country, also cited local deportations which have gone up as well. About a third of the deported immigrants had criminal records. The Pew Hispanic Center recently released a report showing a decreased number of undocumented immigrants in the US from 2005 to 2008. While not identifying a specific a reason for the decrease, that report noted increased enforcement of immigration laws. The Miami Herald has more. AP has additional coverage.

The increase in deportations comes despite ICE’s recent abandonment of its voluntary deportation program. ICE maintains a wide range of other initiatives to combat illegal immigration, including raids. The Transactional Records Access Clearinghouse (TRAC) at Syracuse University reported this summer that US immigration prosecutions hit record levels early this year. TRAC attributed the increase in prosecutions to Operation Streamline, a joint federal program under which federal prosecutors levy minor charges against illegal immigrants crossing the US-Mexico border. “Reentry of a deported alien” is by far the most common charge in immigration prosecutions.

Will this change under President Obama? Only time will tell….Remember, these are the smarmy bastards that forceably inject people with psychotropic drugs without their consent…so they can dump them without any problems.

This Bitchfest by Unknown at Sunday, November 09, 2008