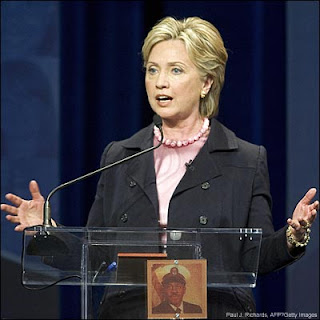 That was Olbermann's lead in line tonight on Countdown.

Wow...just...wow..Its not a bad choice..just an interesting one. Evidently she is on the 'short list' and traveled to Chicago today.

More later as it becomes available.

Ok, it's later. From MSNBC:

Two Obama advisers have told NBC News that Hillary Clinton is under consideration to be secretary of state. Would she be interested? Those who know Clinton say possibly. But her office says that any decisions about the transition are up to the president-elect and his team.

Clinton was seen taking a flight to Chicago today, but an adviser says it was on personal business. It is unknown whether she had any meeting or conversation with Obama while there.

And then Reuters has this but it's also based on NBC news:

The former first lady, who was in a drawn-out battle for the Democratic presidential nomination, is in her second term as a senator from New York.

Actually, I think HRC would be a great choice for SoS...I really do. I hope she wants it and I hope she gets it. The woman is a pitbull..not a Sarah Palin pit..a real pitbull.

Rumor: Is Hillary Clinton on the short list to be Secretary of State?

Fact: Unclear. This rumor is not given much credence in Clinton land or in Obama land; it might well be a creation of the press. Or not. What would Joe Biden think about this?


Tags: Hillary Clinton, Secretary of State
This Bitchfest by Unknown at Thursday, November 13, 2008