Waxman beats Dingell in secret vote for Energy and Commerce 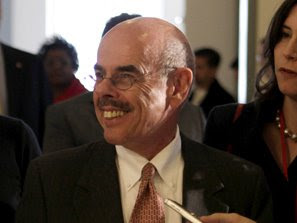 Waxman, the bulldog extraordinaire, in a secret vote has won the chair for the Energy and Commerce Committee this morning, per Politico.

I do heart Henry Waxman. Not only is he left of the center on many things, he is an environmentalist and he takes no prisoners on his current committee, the House Oversight and Reform Committee.

This move shakes up the old boys network of awarding Chairmanships by senority. From Politico:

In a secret-ballot vote in the Cannon Caucus Room, House Democrats ratified an earlier decision by the Steering and Policy Committee to replace the 82-year-old Dingell with his 69-year-old rival. The vote was 137-122 in favor of Waxman.

The ascension of Waxman, a wily environmentalist, recasts a committee that Dingell has chaired since 1981 with an eye toward protecting the domestic auto industry in his native Michigan. The Energy and Commerce Committee has principle jurisdiction over many of President-elect Barack Obama's top legislative priorities, including energy, the environment and health care.

The vote Thursday allows Waxman to unseat the Dean of the House just three short months before he was set to become the longest-serving chairman in the history of the institution.

Waxman's unexpected challenge has quietly divided members of the Democratic Caucus since the election and forced wavering colleagues to cast a gut-wrenching vote. And the results Thursday could leave a bad taste in the mouth of Dingell supporters, who led a vocal effort to keep the chairman while Waxman’s team led the quiet coup that led to Thursday morning’s stunning vote.

This is a good thing for the left m'dear reader...a very good thing. He will hopefully keep Obama to the left of the center on environmental, health insurance and dealing with the Oil Companies and drilling off our coast.

I hope the rightwing nutjobs choke on it. ;)

Update: The Hill website is reporting Nan Pelosi's fingerprints are all over this 'change'. Got to give the old broad props when she does something right...so here's to ya Nan!