Hillary gets the nod this morning... 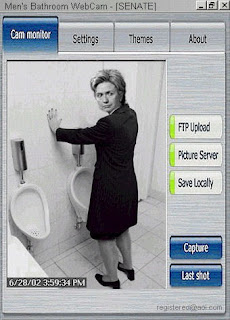 It will be an interesting press conference, seeing Hill and the Big O together again..this time as the team that hopes to lead America out of the desert and darkness of the last eight years..

Obama's financial team is what worries me. I do not feel comfortable with the guys he has picked...all of them have blood on their hands so to speak from helping create the subprime meltdown and resulting clusterfuck.

I am usually a pessimist...or as I like to call it..a realist. The truth is more likely that I am just always wary and a negative person by nature, having a hard time trusting any political animal regardless of the party affiliation.

I want Obama to right our 'ship', I just don't feel confident that he will make it work for the little people.. not by using Bob Rubin in a position of authority or any of his minions like Larry Summers. Check out The Daily Beast profile on Bobby..it ain't pretty.

Eric Holder is a good example of someone I think sucks for a multitude of reasons. His love of the corporatocracy, his embracing the Drug Policy dogma and jailing of pot smokers. Obama has so many problems to deal with, how can he fix them all? but I digress...

Good Luck Hillary...the whole world will be watching ya chica...bet on it. Hopefully you will not become an afterthought like Condi Rice. I am rooting for you to succeed where others have failed...
This Bitchfest by Unknown at Monday, December 01, 2008