One of every ten Americans... 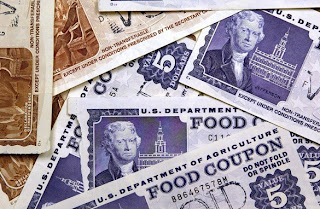 They are losing the homes they live in, or are at least one month behind in paying the mortgage. They are getting food stamps. One in ten,or over 30 Million Americans are using the food stamp program, by the government's own numbers. From the Reuters link:

The number of people using food stamps in September surpassed the previous peak of 29.85 million seen in November 2005 when victims of hurricanes Katrina, Rita and Wilma received emergency benefits, said Jean Daniel of the USDA's Food and Nutrition Service.

We, as residents of this great country, should be sick at heart over this news. The supposed richest country in the world has 30 million people that can't feed themselves every night without government help.

And those are just the ones we know about. There are untold numbers that do not avail themselves of the system for whatever reason.

Last month, the USDA said 36.2 million Americans or 11 percent of households struggle to get enough food to eat, and one-third of them had to sometimes skip or cut back on meals.

During this time of the year when we, the collective we, are giving thanks or buying gifts for loved ones, we should also think about those who can't make ends meet.

Give something to your local foodbank. Every little bit will help. It will make you feel good too. Also, ask Obama and Congress to increase food stamps benefits as part of the next stimulus package. Go to change.gov and do it today. It will only take a minute of your time.

Tag: One in ten americans on food stamps
This Bitchfest by Unknown at Sunday, December 07, 2008