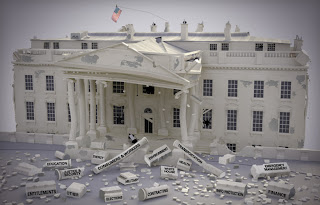 In this, a comprehensive assessment of these failures, we found more than 125 examples of government breakdown in areas as diverse as education, energy, the environment, justice and security, the military and veterans affairs, health care, transportation, financial management, consumer and worker safety, and more — failures which adversely affected ordinary people and made the nation a less open or less secure place to live. While some are, by now, depressingly familiar, many are less well-known but equally distressing. And though the list is diverse, it also reflects some recurring — and troubling — themes.

Some of these problems were in place well before George W. Bush’s inauguration, but were exacerbated by his policies or worsened by his administration’s actions (or inactions). Many of the failings are tied to Bush appointees who appear to have been selected primarily on the basis of ideology and loyalty, rather than competence. Every administration has its share of political cronies, of course, but the examples of the past eight years seem especially stark:

This accounting of the outright failures of our federal government will take your breath away..that is if you care, and I trust that you do. Check it out and tell me what bothered you the most. I am still reading it but felt I had to put this post up first. The pdf report in it's entirety can be read and downloaded here. All 110 pages of it.
This Bitchfest by Unknown at Wednesday, December 10, 2008