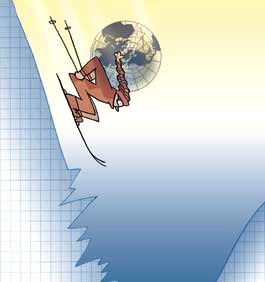 According to the National Bureau of Economic Research (NBER) we have been in a recession for a year now.

Gee, no shit? What was the first clue? From the NYT link:

The evidence of a downturn has been widespread for months: slower production, stagnant wages and hundreds of thousands of lost jobs. But the nonpartisan National Bureau of Economic Research, charged with making the call for the history books, waited until now to weigh in.

In a statement released Monday, the members of the group’s Business Cycle Dating Committee — made up of seven prominent economists, most from the academic sector — said that the economy entered a recession in December 2007.

The committee noted that the contraction in the labor market began in the first month of 2008 and said that the declines in most major indicators, like personal income, manufacturing activity, retail sales, and industrial production, “met the standard for a recession.”

I think many American's could of told them we were in a recession a year ago. Especially folks on fixed incomes, or those that were laid off in the construction sector or a host of other American's that were and still are struggling to make ends meet.

Thanks for the new's gents and stating the obvious.
This Bitchfest by Unknown at Monday, December 01, 2008