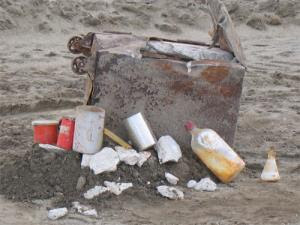 This really makes you feel warm and fuzzy! And it has historical value! From New Scientist:

An old glass jar inside a beaten up old safe at the bottom of a waste pit may seem an unlikely place to find a pivotal piece of 20th century history. But that's just where the first batch of weapons-grade plutonium ever made has been found - abandoned at the world's oldest nuclear processing site.

The potentially dangerous find was made at Hanford, Washington State, the site of a nuclear reservation, established in 1943 to support the US's pioneering nuclear weapons program.

Hanford made the plutonium-239 for Trinity, the first ever nuclear weapon test, on 16 July 1945. Just three-and-a-half weeks later, more Hanford plutonium was used in the nuclear strike on the Japanese city of Nagasaki.

But sloppy work by the contractors running the site saw all kinds of chemical and radioactive waste indiscriminately buried in pits underground over the 40 years Hanford was operational, earning it the accolade of the dirtiest place on Earth.

Hanford...damn, that is irony at it's best ain't it? It's a good read, sure to ruin your breakfast folks.