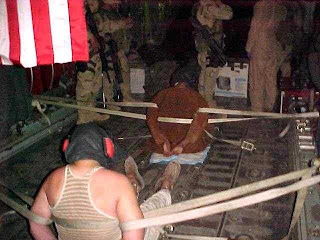 AP WaPo and Reuters are reporting that a 120 day hold has been placed on any military tribunal trials at Gitmo...by Presidential Order. From Reuters:

Hours after taking office on Tuesday, U.S. President Barack Obama ordered military prosecutors in the Guantanamo war crimes tribunals to ask for a 120-day halt in all pending cases.

Military judges were expected to rule on the request on Wednesday at the U.S. naval base in Guantanamo Bay, Cuba, an official involved in the trials said on condition of anonymity.

The request would halt proceedings in 21 pending cases, including the death penalty case against five Guantanamo prisoners accused of plotting the September 11 hijacked plane attacks in 2001.

Prosecutors said in their written request the halt was "in the interests of justice."

This Bitchfest by Unknown at Tuesday, January 20, 2009