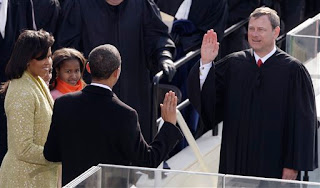 He hasn't been sitting on his hands reading polls, he hasn't been giving us empty speeches or downplaying the economic crisis either. In his first week, Obama has done the following, per Bill Moyers Journal:

In his first full day in office, President Barack Obama enacted two executive orders dealing with government openness and ethics. The NEW YORK TIMES suggested that, like many presidents before him, President Obama carefully chose these orders to send a message about his priorities as President.
*snip*
In one of his first executive orders, President Obama revoked the use of executive privilige as a means for former presidents and their heirs to keep documents from becoming public. In a separate memorandum President Obama undid a post-9/11 directive from the Bush administration that had encouraged federal agencies to deny Freedom of Information Act (FOIA) requests. Additionally, President Obama signed a memorandum outlining his administration's committment to open and transparent government.

Thankfully, Obama's administration also ordered a shut down to any of Bush's midnight regulations that haven't been finalized yet.

Obama has also signed E.O's that stop torture, close Gitmo, and will now allow the federal government to fund family planning clinics outside the U.S. that counsel on abortion.

It's was a busy week for our Commander-in-Chief. And I welcome that with a smile on my face and a song in my heart.

The beginning of a new week and he is still making changes. Today, he signed an Executive Order reversing Bush's fuckery on allowing states to set their own EPA standards. As a Cali native and current resident of one of the smoggiest shitholes in the state, that makes me very happy.
This Bitchfest by Unknown at Monday, January 26, 2009