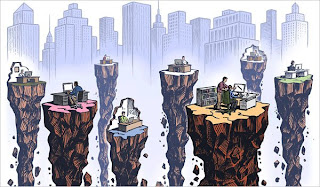 Not like Superman of course, more like Bush43. Oh, and Benny Bernanke wants them too! From the NYT article on the subject:

The Federal Reserve Chairman, Ben S. Bernanke, agreed with Mr. Geithner that Congress should grant the Treasury Department and Federal Reserve new powers. Mr. Bernanke told members of the House Financial Services Committee that if the government had had such authority in September, when the depth of A.I.G.’s troubles became obvious, the company could have been put into receivership or conservatorship and regulators would have been able to “unwind it slowly, protect policyholders” and take other prudent measures.

We have foxes in charge of the financial hen house now...why would we want to give them more power?

The Glass-Steagall act and the 1956 Bank Holding Company Act were rolled back by greedy Phil Gramm and his cohorts when they created the Financial Services Modernization Act, which was signed into law by Bill Clinton. We need to re-institute them and make them stronger. We don't need a Financial Czar like Bernanke or Geithner.

Absolute power corrupts.
This Bitchfest by Unknown at Wednesday, March 25, 2009