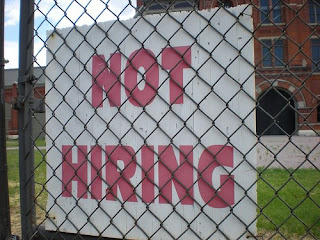 We have extraordinarily high unemployment numbers. Double fucking digits. From one of our local channels, the CBS variety:

Kern County's unemployment rate increased to 13.8 percent in January, according to figures released Thursday by the California Employment Development Department.

The county's unemployment rate jumped from a revised 11.8 percent in December and 9.8 percent last year, according to the department.

Across the country, employers cut a net total of nearly 600,000 jobs in January, the highest monthly tally since 1974. That sent the national unemployment rate to 7.6 percent.

Numerous cities in Kern County had January unemployment rates that were much higher than the county's overall rate. Lamont, McFarland, Shafter and Wasco all had unemployment rates above 20 percent and Arvin and Delano each topped 34 percent.


I know it's hard for most everyone at this point, but Jaysus-friggin-Christ...its real bad here folks..
This Bitchfest by Unknown at Friday, March 06, 2009