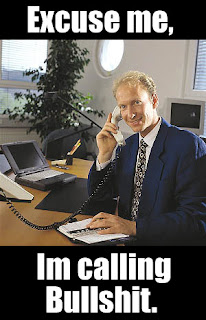 Let me start by saying I watch every Presidential news conference. Sorry folks but I am calling bullshit on the Presidents newest declaration. He is publicly feigning outrage at AIG because he already knows there is nothing that can be done to stop the millions being handed out to the assholes that helped make this economic mess.

It's simply populous rhetoric on his part, designed to show that he feels our pain.

He is, after all, a politician.

I have nothing against Obama, I just think his presser was theater at its finest. A Time magazine article says it best for me:

In the middle of decrying the misdeeds of the financial firm AIG, President Obama cracked a joke. "Excuse me," he said Monday, after coughing into the microphone. "I am choked up with anger here." There were laughs all around the gilded East Room of the White House, because he didn't sound angry at all.

The laughter, of course, did not fit the occasion, the latest in a seemingly endless stream of public events at which Washington's political leaders work themselves into high dudgeon over the sins of financial wizards who, we are told over and over again, have messed up the world for everyone else. But then, you can only act outraged about the same thing so many times before it all starts to sound stale. These spectacles, the public rhetorical floggings, have become teleplays, as predictable as a daytime soap opera, as comforting as a wet rock. (See pictures of the top 10 scared traders.)

Obama had promised weeks ago to stop the excessive bonuses on Wall Street, at a time when the existence of the coming AIG bonuses had already been disclosed by the excellent reporting of Bloomberg News. Obama's staff had vowed more recently that the further infusion of taxpayer money into AIG, which the federal government now controls 80% of, was appropriate and necessary. And now he was faced with the fact that his new executive compensation policy, which only applied to a narrow subset of executives at a few institutions, had been powerless to stop the worst violators at AIG from getting their undeserved payday. (See the worst business deals of 2008.)

I realize that this mess wasn't created by Obama. I realize he is doing what he can, but damn dude, don't play me...I ain't stupid.
This Bitchfest by Unknown at Tuesday, March 17, 2009