11,000 Iraqi's still being held by US Government 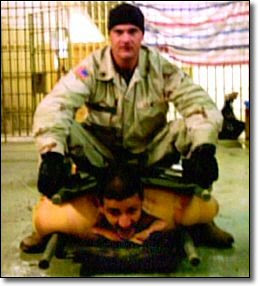 The US-led Multi-National Force in Iraq said Tuesday that it is still holding 11,057 Iraqi prisoners in three separate camps throughout the country. The prisoners currently held in the three US camps, Camp Taji, Camp Cropper, and Camp Bucca, will either be released or transferred to Iraqi authorities as the military works to transfer control of the prisons to the Iraqi government. Camp Bucca, in southern Iraq, is expected to be the first to close when the total prison population drops below 8,000. The other two facilities will close by August 2010, in accordance with the Status of Forces Agreement (SOFA) that went into effect in January and requires all US troops to withdraw from Iraq by the end of 2001. A fourth US-run prison, Abu Ghraib, was transferred back to Iraqi control in 2006 following the release of photographs depicting prisoner abuse by US military personnel.

In November, Iraqi human rights activists said they were concerned about the treatment of detainees due to be transferred from US military custody to Iraqi authorities under the then-proposed SOFA. In August, the US military said that it has released more than 10,000 Iraqi detainees over the past year. In November 2007, US military forces in Iraq released 500 detainees at a joint ceremony with the Iraqi government at Camp Victory outside Baghdad.

The Iraq government isn't known for it's judicial system. Of course our methods, via the military tribunals, were horrific as well. The prisoners will most likely be dealt with according to whether they are Shiite or Sunni. This doesn't bode well for any Sunni prisoners.
This Bitchfest by Unknown at Thursday, June 11, 2009